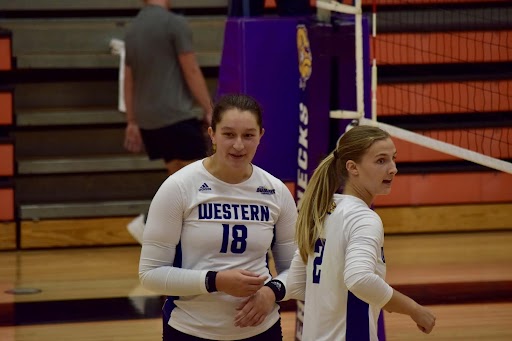 The road trip did not go as planned for the Leathernecks (4-13, 0-5) this past week as they still sit winless in Summit League play. WIU opened the road trip Tuesday night in Kansas City against the UMKC Roos. The Roos jumped out to an early two set lead over the Leathernecks, but Western Illinois was able to fight back with a 28-26 set three win. They would ultimately fall 25-19 in the fourth set, dropping their sixth straight match. Libero Karli Wenzel recorded her 10th straight double digit game in this one, leading the team with 15 digs. The trio of Elizabeth Ziegler, Aubrey Putnam and Brittany Wulf combined for 33 of Western Illinois 42 kills.

WIU looked to rebound just two days later, as they traveled to the University of Nebraska-Omaha. Omaha had dropped 6 of its previous 7 matches, but were able to sweep the Leathernecks in three sets (25-20, 25-16, 25-23). Sophomore Brittany Wulf returned back home to the state of Nebraska and went on a tear in front of her friends and family. Wulf led all Leathernecks in kills with 16, while adding 8 digs and an ace. Wenzel led the Leathernecks with 13 digs, continuing  her red hot streak of consecutive games in a row with double digit digs. Her streak sat at 11 games in a row, before being snapped in the loss to Denver.

With the winless road trip, the Leathernecks have now lost eight straight games and are looking to flip the script as they return home to Western Hall, for matches against the South Dakota State Jackrabbits (8-8, 2-2) and the  South Dakota Coyotes (14-2, 3-1). WIU welcomes SDSU on Thursday, the match is set to begin at 6pm. A win over the struggling Jackrabbits can get the Leathernecks back on track, with a lot of games left to go. The real test is going to be on Saturday at noon, as the conference leading Coyotes come to town. Follow along with all the action on @wiuvolleyball on twitter or by visiting goleathernecks.com.

Leathernecks win first game of the season against South Dakota